2011 – the 10th annual Deep Freeze! A group of winter enthusiasts has been getting together since 2002 in the Sudbury, Ontario area and indulging in their passion for winter camping. The first group of  7 camped for a weekend along the banks of the Vermilion River. The following year at a canoe gathering of folks from the old Canadian Canoe Routes forums it was decicded to use the Budd Car train service out of Sudbury to access some remote areas to camp. The group was 20 strong in 2003 and the attendance over the years has fluctuated as high as 44 one year but mostly in the 25-35 range with folks coming and going.

The plans for the 10th annual were settled upon and the Nitro creek area was again our destination. The group all showed up at the Sudbury station early Saturday morning only to find that the train was cancelled! What to do? The group discussed options and plans evolved. One group (9) consisting of the fathers and kids decided that  the intermittent  train availability wasn’t acceptable and opted for heading to Killarney Provincial Park to camp for the week. The rest of the group (23) decided to head north on Hwy 144 and strike out across country via some lakes and trails to the Nitro Creek  campsite and then use the Budd Car to get out later in the week.  Vehicles were left at the Cartier train station in anticipation of the plan coming to fruition.

We headed north and headed west for Smokefox Lake for the first night. We crossed the first pothole from the highway, busted a trail into Sideburn Lake and headed for Smokefox. We found a trapper’s portage trail cleared into Smokefox and we all found a place to setup for the evening. The plan was to break a trail into Nitro creek the next day and take some of the heavier supplies across as a group effort. Well, that worked and we cleared a trail about ¾ of the way and stashed some supplies. Some of the group had planned on attending on the Tuesday train and we found out through some satellite phone messaging that the train was cancelled again due to mechanical problems. It was decided that we would just stay at Smokefox Lake for the week, which turned out to be a good call as the train didn’t run at all that week!

The Tuesday folks were all contacted and headed into Smokefox and we carried on with on normal deep freeze activities of hiking, skiing, ice fishing and socializing etc.
A celebratory party (with fireworks) in honour of 10 years of “freezing” was held along with the “Dawg House’s” annual wine and cheese on another evening. 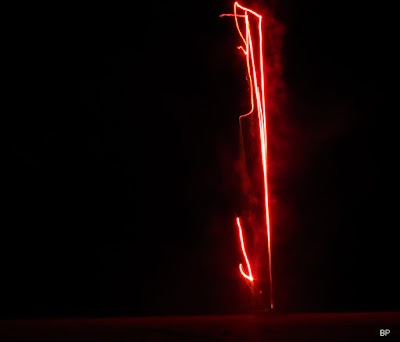 All in all, another great trip with a great bunch of fellow campers. We planned to again try using the Budd Car the following year so that the families could also attend once again. It’s always great to have the kids along learning new skills and helping to keep us all younger!

Canoedog - Sid Bredin
Port Coquitlam, British Columbia, Canada
Welcome to canoedog.ca. This personal site is a way for me to keep a record of some of my canoeing, kayaking and winter camping adventures and as a vehicle to share them and information to other interested folks.